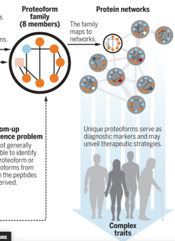 Identifying precise molecular forms of proteins can improve our understanding of function Proteoforms—the different forms of proteins produced from the genome with a variety of sequence variations, splice isoforms, and myriad posttranslational modifications (1)—are critical elements in all biological systems. Yang et al. (2) recently showed that the functions of proteins produced from splice variants from a given gene—different proteoforms—can be as different as those for proteins encoded by entirely different genes. Li et al. (3) showed that splice variants play a central role in modulating complex traits. However, the standard paradigm of proteomic analysis, the “bottom-up” strategy pioneered by Eng and Yates some 20 years ago (4), does not directly identify proteoforms. We argue that proteomic analysis needs to provide the identities and abundances of the proteoforms themselves, rather than just their peptide surrogates. Developing new proteome-wide strategies to accomplish this goal presents a formidable but not insurmountable technological challenge that will benefit the biomedical community.

Proteoforms as the Next Proteomics Currency