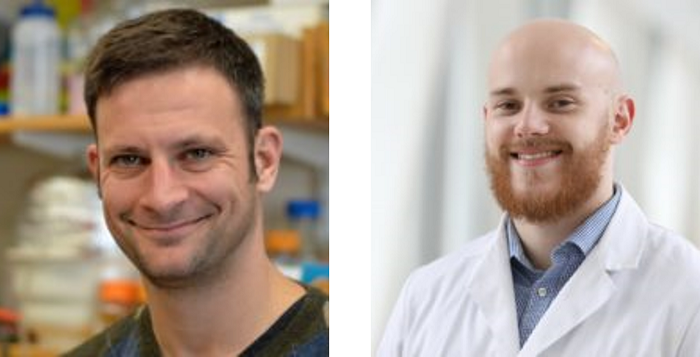 Northwestern Medicine investigators have discovered novel mechanisms that regulate a cell’s response to molecular stressors, according to a study published in the Proceedings of the National Academy of Sciences.

The findings may help improve the understanding of how cancer and other diseases use stress response programming to survive.

“Cancers have these deranged genomes. They have mutations, they’re hyper-proliferative, and they’re subjected to chemotherapies and radiation, so these stress response genes really become critical for cancer survival,” said Marc Mendillo, PhD, assistant professor of Biochemistry and Molecular Genetics and senior author of the study.

David Amici, a student in the Medical Scientist Training Program (MSTP), was lead author of the study.

In the current study, Mendillo’s team used genome-scale fitness screening data compiled by a computational tool called FIREWORKS, which was developed by Mendillo’s laboratory, to map the stress phenotypes of more than 700 cancer cell lines, each of which has a unique burden of intrinsic stressors.

The approach revealed a network of genes promoting cellular stress responses; one gene in particular caught the investigators’ attention: HAPSTR1.

They discovered that HAPSTR1 plays a central role in cellular stress signaling and is also mechanistically induced by specific types of stressors like DNA damage, cellular starvation and proteotoxicity.

Moreover, HAPSTR1 both interacts with and is degraded by a protein called HUWE1, which has been previously implicated in different cancers and neurodevelopmental disorders. The protein is an E3 ubiquitin ligase, meaning its sole function is to hunt down specific proteins and degrade them.

Additional analysis revealed that HUWE1 and HAPSTR1 have a somewhat unconventional relationship: HUWE1 assists HAPSTR1 in controlling stress signaling and in turn, HUWE1 feeds back to promote the degradation of HAPSTR1.

“The relationship is complicated in that we know that they have this shared function because basically turning off either one results in similar types of effects,” Mendillo said.

Overall, the findings point to HAPSTR1 as a central player within a network of stress response pathways promoting cellular adaptability, according to Mendillo.

“The bottom line is we know that HAPSTR1 is promoting cellular resilience to these various types of stresses. We think this is going to be important in cancers and probably other diseases, too,” Mendillo said.